Featured on our Chef Spotlight this month is our very own Executive Chef of Best Western Plus Island Palms’ Blue Wave Bar & Grill, Christopher Spayde! From learning more about his cooking style, to the best cooking advice he’s ever received, Christopher shares the inside scoop on his cooking experience and more. 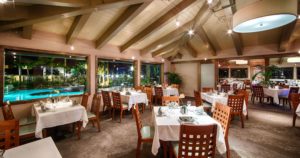 I would have to describe my cooking style as rather eclectic and stream of consciousness inspired by everyday life, travels, and growing up in southern California. I tend to jump from being fully immersed and learning all I can about one source of inspiration to another fairly quickly.

What drew you to a cooking career?

I found cooking to be a hobby that I enjoyed sharing with others when I was younger. When I was still in college and working in other lines of work, I would find myself often cooking items I learned from my parents and grandmother for my roommates and generally found the kitchen to be a comfortable place in a social setting. I enrolled in culinary school at the Art Institute of CA – San Diego at the suggestion of my friend and now colleague Chef Eric Manuel at the Dana on Mission Bay. I began working with him at some local sushi bars, eventually parting ways to work for a former culinary instructor that was revamping the corporate dining program at Qualcomm. When a chef position became available in the Bartell group, Eric suggested that I apply. I have been at the Best Western Plus Island Palms since.

Do you cook at home? If so, what’s your go-to meal?

I do occasionally cook at home, not near as much as I’d like to though. I don’t know that I would have a go-to meal. I usually just try to think of what I could make from the ingredients I have available. However, if I had to pick a go-to meal it would probably be spaghetti with meat sauce, that is one of my favorites.

What’s the best cooking advice you ever received?

The best cooking advice I’ve ever received would probably be that you can always add to your dish. Whether it be salt, acid, heat, sweet, or any other flavor components it is easy to gradually add a bit more, but can be quite difficult to balance a flavor once you have gone too far.

What is your signature dish?

A signature dish that I am proud of and hasn’t come off the Blue Wave Bar and Grill menu since my first menu revision would be the seared scallops with shellfish risotto. We serve three U10 scallops pan seared atop a bed of risotto prepared with jumbo lump crab, wild caught gulf shrimp, and lobster broth. The dish is garnished with a tapenade of grilled asparagus, tomato, shallot, garlic, olive oil, and balsamic vinegar reduction.